One of the main unnecessary polluters in every town and city around the world is the army of delivery vans and motorbikes that move our things, large and small, from one place to another.

There is a long tradition of walking or cycling to deliver smaller packages but the increase in online sales and soaring populations in our apartment filled cities has meant that it is now the norm to see ‘white van man’ (or the local equivalent) in every urban environment. Sadly, it is also not uncommon to see a 7.5 tonne truck being backed up and spewing diesel fumes outside some random apartment block as it delivers an item that might weigh less than a typical suitcase.

This ‘problem waiting for a solution’ seems to have found its moment as more and more urban businesses and individuals are choosing to use delivery companies that promise zero emission delivery. They do this by delivering by bicycle, e-bike, modified box van tricycles and electric cars and vans. 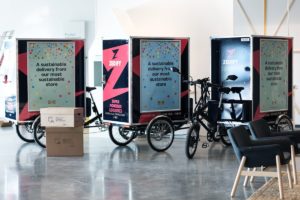 One such company is the UK’s Zedify whose network of clean energy couriers has caught the imagination of Swedish furniture giant Ikea. Their Greenwich store in London, which Ikea claim is their ‘most sustainable store yet’ enhances that belief by offering bike delivery for their products – in modified tricycles.

Not exactly flatpack in a backpack, but pretty close

Not exactly flatpack in a backpack, but pretty close – and the you can be sure the guys that actually make the deliveries in all weather are super fit.

A Cambridge local TV channel ‘That’s Cambridge’ recently did quite an uplifting story on the Zedify guys when they launched/rebranded in that city for National Clean Air Day.

You can only wish these guys, and similar delivery companies, the very best of luck in their endeavours. Parcel by parcel, it is obvious their goal is to see everything delivered in a non-polluting way.

It is worth adding that the comment from one of the tricycle couriers, Mark Nash, about the company ‘treating its workers well’ is also something to celebrate. Proof that projects and businesses that put the environment in the centre of their world can be profitable.