Home Latest Stories Ed Sheeran Song ‘All Of The Stars’ Helps Prepare The World For...

To a background of the song ‘All Of the Stars’ by British singer Ed Sheeran, this 2019 Earth Hour film has been made to remind people, that wherever we are, and whoever we are, we can make a symbolic stand at 8.30pm local time on the last Saturday in March to announce we want change.

The ever-growing ‘Earth Hour’ movement, co-ordinated by the World Wildlife Fund (WWF), is set once again to remind us that by switching off the lights for one hour, we can show solidarity with others around the world at overcoming climate change and biodiversity threats.

Lights are being turned off at many of the world’s most famous landmarks, including the Sydney Opera House, the Golden Gate Bridge, the Eiffel Tower, London’s Tower Bridge, the Empire State Building, the Tokyo Tower, Berlin’s Brandenburg Gate, Rio’s statue of Christ the Redeemer, the Colosseum in Rome, the Confucius Temple in Beijing, the Kremlin in Moscow, the Great Pyramids of Giza, and hundreds of others.

remote locations on the planet, such as the Scott Base in Antarctica … have agreed to switch off for an hour

They are all ‘switching off’. Even in the most remote locations on the planet, such as the Scott Base in Antarctica and all the other 50 bases in the Antarctic have agreed to switch off for an hour, using only safety lighting. 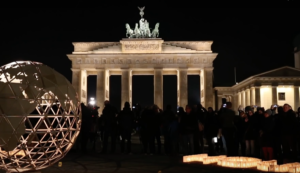 Switching Off The Lights For One Hour on its own is never going to stop Climate Change, the destruction of our lands and wildlife, or remove plastics from our oceans and soils, but that is not the direct goal of Earth Hour. Instead the organisers hope, according to their website, to: “spark never-before-had conversations on the loss of nature and the urgent need to protect it”.

Before people change, people need to find a reason to change. Earth Hour certainly helps remind people of what’s happening right in front of our eyes.

Quite nice that the song ‘All of the Stars’ is used, considering Earth is the only planet in the Universe known to have life.