Of all the crazy things we have seen with regard to alternative energy, possibly the most fearful to watch are the ever increasing number of base jumps from the nacelle or even blades of the world’s wind turbines. 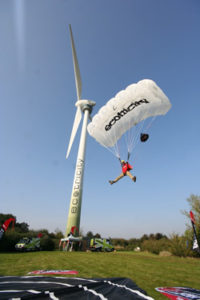 The first ‘legal’ wind turbine jump took place off an Ecotricity tower in Norfolk, England, in 2008

The craze for ‘legal’ wind turbine jumps began over a decade ago in September 2008 when Ecotricity handed over a wind turbine in Swaffham, in Norfolk, England, for use for the first ever British Open Base Jumping Championship. On that day thirty base jumpers took part in the final round aiming for a small bullseye just 8 to 10 seconds away on the ground after they launched into the air. All participants, we’re glad to say, had at least 100 previous base jumps, all survived, and the winner was Australian Christopher ‘Dougs’ McDougal.

One particular daredevil, German extreme sports specialist Johannes ‘JoJo’ Rose, whose jump from a Vestas blade 95m high set Youtube on fire in 2011, noted after his amazing jump that while walking along the stationary blade to make the jump he: “felt like a pirate on a ship’s plank”.

Rose left us all with one question after his jump from such a crazily dangerous height: Why did he feel the need to wear a helmet? If his parachute didn’t open he would certainly have been … toast.

The best reply, by one of those who first saw the film of his jump was that he simply used the helmet to ‘keep the thousands of bone and brain fragments in a convenient little bowl’ should things not work out too well.

As wind energy moves increasingly to offshore and blades become longer, necessitating taller wind turbines and thus reducing the chances of ‘death by wind turbine jump’ headlines – Environment TV have found there is, incredibly, a historical connection between base jumping and wind power.

One of the more legitimate claimants for the title of first ever base jumper was Fausto Veranzio, the 16th Century Venetian polymath and Bishop. The Bishop is reputed to have jumped from St Mark’s Campanile in Venice in 1617, at the age of 65, in a parachute of his own design. 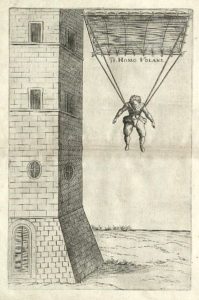 Amazingly, and in one of the greatest coincidences in wind history, one of Fausto Veranzio’s other claims to fame were his numerous designs for early wind mills and turbines, described in his book ‘Machinae Novae; in 1595.