Home Energy Boss Gets Tied To Windmill As Every Train In The Netherlands Runs...

Here’s a couple of amazing facts that might be of interest. The first is that Roger van Boxtel, the 64 year old CEO of Dutch Railways (Nederlandse Spoorwegen – NS) once strapped himself to a windmill blade in Holland and did the full 360 degree turn of the sky like he was involved in some medieval torture. Except, instead of screaming he was patently loving every minute of his journey.

The second, and way more important fact, is that he did his windmill trip to prove that people can literally ‘travel on the wind’ – and he was out to celebrate, in a way only a Dutchman would, the fact that EVERY train in the Netherlands runs 100% on wind power.

Yes, in a very impressive world record, since 2017 the Netherlands became the first country on the planet whose entire rail network now runs entirely on wind power. Think about this, we’ve gone from human drawn rail, to horse drawn rail, to steam trains, to diesel power, to carbon electric, and now to the next rail generation – wind rail.

And how did this amazing turn of events all come about?

In short, the rail carriers along with Dutch energy company, Eneco, got together in 2015 and co-operated in ensuring trains in the Netherlands would run exclusively on electricity from wind power. 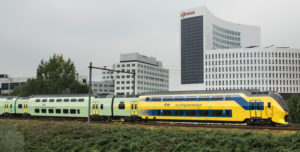 When the partnership was formed Eneco and NS celebrated by introducing a train with a green exterior livery symbolic of the green nature of the energy and added a blue interior ceiling to the train to depict typical Dutch skies and reflect the fact the energy powering the train came, literally, from the skies above.

And so, to warm the hearts of everyone who loves that alternative energy is changing the world, be happy in the new reality that the one-third of a billion passengers who travel on Dutch Railways this year will have made their journeys powered by one of the purest resources on the planet – wind.

Oh, and for those who don’t understand what the wonderful Roger van Boxtel is saying, the translation from Dutch to English goes something like this: 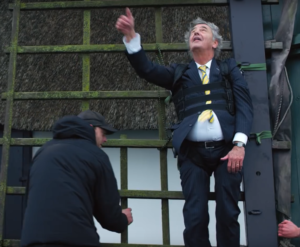 “NS consumes a lot of energy, and that’s bad for the environment. So we decided to make a change.

From January 1, 2017 all travel in the Netherlands by train is 100 percent wind power.”

He then goes on to point out that as he is a little Dutchman he can surely cope with some wind before adding that the spinning of a typical turbine for one hour can take a train on a journey from Utrecht to Groningen – which is a distance of around 115 miles (185km).

His happy exclamation at the top of the windmill is translated as: “Travel on the wind. I’m blown away”.

Where Do We Put A Lifetime’s Worth Of The Planet’s Nuclear Waste?