When Japanese engineer Atsushi Shimizu got to grips with what had happened at the Fukushima nuclear plant in March 2011 after Japan’s largest earthquake in recorded history, his world reportedly ‘flipped’.

Previously, a strong advocate of nuclear because he regarded it as clean, Shimuzu was so freaked by the disaster he decided not to leave Japan’s energy needs to future generations but to devote his efforts to helping find some of the solutions himself. No mean feat in a country that since the disaster has imported more than 80 percent of its energy.

With no previous experience in renewable power, one of the areas he looked into was wind, quickly realising that the great typhoons that hit Japan on a regular basis were a potential source of relatively free energy. Traditionally seen as a problem for the wind energy industry because of their incredible, but destructive, force, Shimizu realised if they could be harnessed in a different way, the power available might be off the chart.

A few detailed calculations later and he understood that a typical single typhoon had enough raw power to fulfil all of Japan’s energy needs for the next half a century if it could be harnessed. 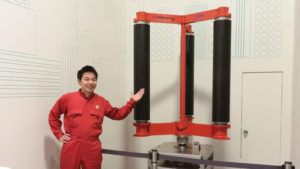 While looking at blade design he also came across designs of ships and aircraft that took advantage of the ‘magnus effect’, the amazing phenomenon that enables footballers to make curved free kicks by placing spin on the ball, and began to look at how wind turbine blades could use this effect to offset the destructive force of a typhoon.

In 2013 he began a company called Challenergy, its goal being to literally stand up to typhoons and take some of that massive power, previously ignored power, and turn it from a solely destructive force to a force for good.

We wish him and Challenergy the best in his endeavours. In the meantime, if you want to get an idea of just how cool the magnus effect can be, here is a short film for your amusement…